Janet Jagan stood out as a political leader, journalist and stateswoman

There are few politicians, who on their arrival on the political scene, bring with them an air of freshness to the humdrum of local politics. Janet Jagan was one of such. Born on 2Oth October 1920, she brought with her a huge amount of freshness, that pushed against the stale and male-dominated politics obtaining at the time in colonial British Guiana. Suffice it to say that the freshness of her appearance on the political scene was felt not only in the first years of her arrival in the colony, on the contrary, that freshness was manifested in thought, word and deed continued throughout her entire life as a political leader, journalist and states-woman. Arriving in British Guiana as a White, attractive American woman, Janet Jagan was, politically aware that coloured people in a colonial society would talk amongst themselves about their precarious lives, but would dare not implicate the high and mighty outside their company nor resort to political action to change that precariousness so typical of the colonial order. 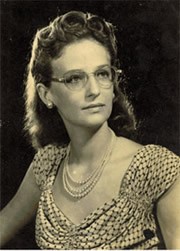 Long before the digital age, and, under seemingly insurmountable conditions, compounded by limited resources, Janet Jagan turbocharged into the prevailing backward socio-economic conditions that shackled women as hapless victims of colonial rule. What made her stand out as the primus inter pares amongst women, was her immersion in and advocacy of left-wing politics characterized by her anti-colonial, freedom-loving and internationalist outlook powered by her commitment and dedication to a national struggle to set Guyana free as an independent nation. Left-wing or radical politics in those days was cast in the mode of anti-establishment and to be engaged in subversive activities aimed at overthrowing the established order. The political and social vineyards in which Janet Jagan laboured was cultivated by the Whitehall-pedigreed sugar barons and colonial overlords who shared the same class identity and unity of purpose in maintaining the existing order of oppression, suppression and exploitation of the poor and dispossessed.

Small wonder why in 1952, the satraps of the colonial powers squatting in the Legislative Council, moved and supported the passage of the Subversive Literature Motion to ban the entry of progressive and anti-colonial literature into the colony. Janet Jagan ‘stormed the Bastille’ as it were, waging battle to educate women and men who laboured at the sugar plantations, the waterfront, the fields and factories as well as domestics, as they were known in those days, about their fundamental rights.Janet Jagan’s groundings with the people in general, and mobilization of women in particular, were considered hostile and unfriendly acts by the colonial authorities who viewed her political activism as disruptive aimed at fomenting unrest in what the colonial authorities considered to be the ‘serene and benevolent’ order of the day. Stereotyped as a ‘White American Jew’ who had no place in Guyanese politics, racist epithets leveled against her neither distracted nor dissuaded Janet Jagan from discharging her heavy responsibilities with vigour and selflessness never seen before by any woman in the colony at that time. To her, life was as Samuel Johnson described it; ‘an arduous and tragic struggle with more to endure than to enjoy’.

The 1960’s was probably the most difficult period in her political life. What today would qualify as crimes against humanity were perpetrated while she served as Minister of Home Affairs during the 1963-1964 period. To this day, modern-day quasi ideologues who dislike Janet Jagan continue to label her, even in death, as a ‘hardliner’ and ‘Old Guard’ without having the slightest notion of her contribution to Guyana as a trade unionist, woman activist, politician, Deputy Speaker of the Legis-lative Assembly, Minister of Government, Member of Parlia-ment, diplomat, first ever Prime Minister and woman President of Guyana. Janet Jagan’s whiteness was neither a humbug nor some ethnic honorific right of passage to meet, greet and ground with Guyanese working people.

At bottom-house and street-corner meetings, Mrs Jagan spoke freely and understandably. She chose her words carefully during debates in parliament and privately as at internal party meetings or at cabinet. In exceptional circumstances, she did not mince words in letting her interlocutor know what her views were on matters under discussion. For a left-wing politician to run for political office and win at elections was unprecedented in those days. But Janet Jagan did just that in 1953. 44 Years later, she was elected the world’s 22nd Woman Head of State. Long before then, she helped dismantle legally, the sexist and structural barriers against women though many are still with us culturally to this day. Images still linger in the heads of some who stubbornly refuse to accept her apology and explanation for throwing a Court Order over her shoulder. “Yes, I regret what took place and I wish to apologize for my action… I also wish to mention very categorically, that it had nothing to do with disrespect for the laws or our Constitution.”

The brightest political act in another dark period of our country’s recent history was manifested when Janet Jagan was sworn in on December 18, 1977, as the fifth Executive President of Guyana’s following the election where she won a stunning 55.5 per cent of the valid votes cast. The significance of Janet Jagan, a White woman as president of Guyana was a phenomenon that was unfathomable and unacceptable for the PNC’s leadership. Not finding one iota of corruption or scandalous to pin on her, they turned to race and ethnicity, threats and violence to undermine and deprive her of the powerful mandate handed to her by the electorate. Asked how she felt about being elected President of Guyana she replied; “I felt like I was going into a prison.” It was perhaps, in that frame of mind after serving just three years in office that she agreed to cut short her term in office in the wake of multiple violent protests by the PNC. According to Mrs Jagan; “If it had not been for the responsible behavior of the PPP/Civic, I’m afraid this country may have gone back into the abyss that we went into in the ‘60’s.”

On Saturday, 28th March 2009, Janet Jagan passed away. Her stellar reputation outshone the many challenges she faced given the weight of prejudices stacked against her as a woman. Her feisty journalism and political stature was unquestionable; so was her popularity inside the PPP and amongst the electorate. She entered the political scene at a time when politics was considered an exclusively male domain. But in the end, many were forced to accept her as a revolutionary fighter and leader.