Amazon Warriors slip at the death for a fifth time 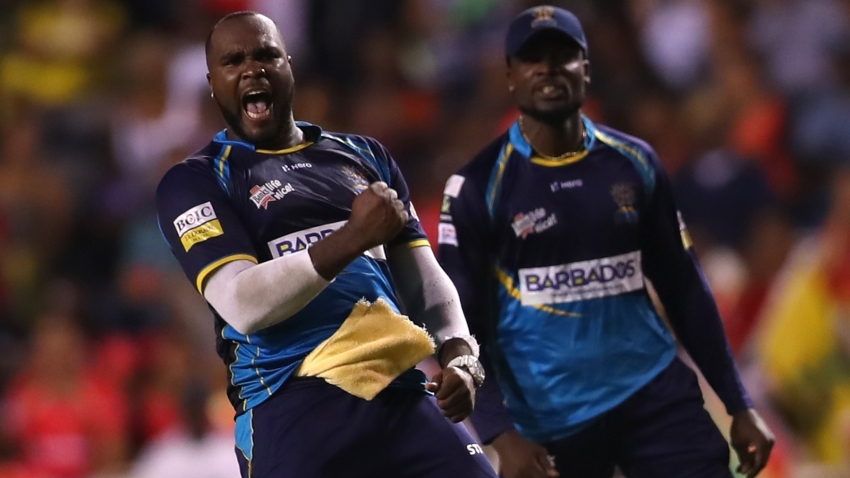 Ashley Nurse (left) and Jonathan Carter, two of the better performers for the Barbados Tridents in the final of the Hero Caribbean Premier League at the Brian Lara Cricket Academy on Saturday.

The Guyana Amazon Warriors are playing the role of bridesmaid for a fifth time in the Hero Caribbean Premier League after the Barbados Tridents lifted the 2019 title thanks to an important half century from Jonathan Carter.

Choosing to bat, the Tridents started well enough with Charles, 39 and Alex Hales, 28, getting them moving.

When Hales miscued a length slower ball from Romario Shepherd in the sixth over, it brought with it a debutant in Philip Salt. Salt was replacing the injured JP Duminy and like his name in Caribbean culture suggests, was unfortunate in being adjudged caught behind off his elbow without scoring from the bowling of Ben Laughlin.

That dismissal sparked a mini-collapse, thanks mostly to the brilliant fielding of Paul, who ran out Jason Holder (one), the skipper going for two, and Shakib Al Hasan, 15.

Before that Shai Hope (eight) went to a brilliant catch from Paul, the medium pacer catching a firmly struck pull shot that looked for all the world four runs.

Then Ashley Nurse joined Carter at the crease and the two set about taking the Tridents from 108-6 with the last ball of the 15th over remaining, to 171 without further loss. Nurse would play the anchor role, scoring 19 from 15. Carter was more destructive, striking four fours and four sixes to score his 51 from just 27 deliveries.

The total was always going to be challenging, in fact, for the Warriors to avoid being bridesmaids again, they would have to score more runs than anybody in the history of CPL finals.

Brandon King, the leading runscorer in the tournament threatened to make the run chase look run of the mill, but Nurse had more to say about the game, stumping him as he went for a lofted on drive.

Shoaib Malik has not scored well against the Tridents and the trend would continue for the Warriors captain, who found Reifer on the mid-wicket boundary after he had absolutely creamed a long hop from Walsh Jr for just four.

Reifer, who opened the bowling for the first time this season, first got rid of the injured Chandrapaul Hemraj, as he miscued a cover drive and was caught in somewhat unorthodox fashion by Shakib Al Hasan, and from there, things just got better for the all rounder.

Reifer was again in on the action as he was quick when bowling to the dangerous Shimron Hetmyer, choking him for room as he tried to launch a ball over long on.

That wicket was big, but it was no less important than when he dragged Romario Shepherd into playing at a wide delivery to be caught behind with the game, though leaning towards Barbados, still in the balance.

With 33 needed in the final over, there was still a glimmer of hope for a team that, up to that point, had not lost, but when Reifer bamboozled Chris Green with a slower ball first up, that was all she wrote.

Tridents beat the unbeatable Warriors to take the ...
Harper returns as Windies selector