After the 5-1 loss to Australia, Lloyd was ready to fight fire with fire and introduced a four-prong pace attack which soon became the feared weapon that the Windies used to dominate world cricket on all types of pitches. 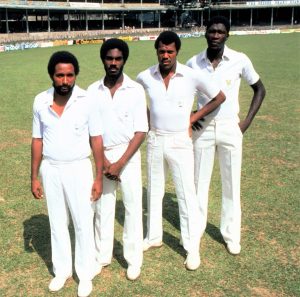 Andy Roberts, Bernard Julien, Vanburn Holder and Wayne Daniel comprised the pace quartet with a young Michael Holding waiting in the wings for the 1976 tour to England.
Smarting from their Australia defeat, West Indies were keen to do well. Before the series began England Captain, South African born Tony Greg said he would make the West Indies grovel.
The word grovel means ‘to crawl on the ground, especially in a show of fear or humility’ and reminded West Indians of the days of slavery when the slaves groveled at the feet of white plantation owners who beat them to work. Greg’s comment ignited the passion to prove that West Indian people no longer suffered from inferiority complex when they came up against their old masters.
England were soundly beaten 3-nill as the specialist spinners, Albert Padmore and Rafik Jumadeen were just given one match each as Lloyd relied on pace, his new weapon of destruction.
Holding’s 8-92 and 6-57 on a placid Oval track was a magnificent performance and to this day remains the best match figures in a test by a West Indian. Roberts was also devastating on that English tour, while Richards emphasized his class with 829 runs in four tests including double centuries at TrentBridge and the Oval. Greenidge was also in sublime form scoring two of his three hundreds on a difficult track at Old Trafford.
In the end it was Greig and his English team who had to ‘grovel’ as West Indies won the last three tests in emphatic fashion.
Richards was simply magnificent and finished the year 1976 with 1,710 runs from 11 matches.
PACKER SERIES MARRED 50TH YEAR OF WI CRICKET
It was 1978 and the 50th year of West Indies cricket. Everyone was anticipating the visit of Bobby Simpson’s Australians. 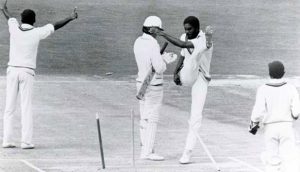 Mikey Holding kicks out the stumps after another appeal was turned down on the 1980 tour to New Zealand.

Australia did not select the players who had signed for the World Series Cricket (WSC) but the West Indies Board selected a full strength team claiming that none of the WSC players had refused to play.
Although the express pace of Jeff Thompson was available to the visitors, West Indies won the first two tests with Alvin Kallicharran getting a hundred in the first test and Desmond Haynes, who made his debut in this series to replace Fredricks who had retired, getting half-centuries in his first three innings.
Haynes, who had also signed for the Kerry Packer World series organized by the Australian millionaire, was dropped by the West Indies Board for the third test in Guyana.
Lloyd resigned the captaincy in protest and the rest of the Packer contracted players decided not to play in solidarity for their skipper. Kallicharran took over as skipper.
Larry Gomes, a reliable left-hander from Trinidad, got his chance to enter test cricket, and the West Indies, although weakened, won the fourth test to win the series 3-1. 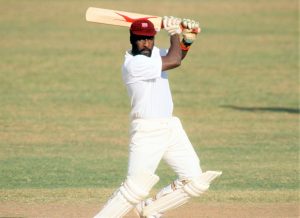 Viv Richards ‘the Master Blaster’ destroyed the World’s top bowlers at will.

Kallicharran, who had initially signed with Paker but subsequently changed his mind, was given the captaincy as West Indies toured India in 1979 and without the Packer players, lost the six-test series 1-nil.
A different, but in many ways similar situation, a quarter of a century later, saw Kallicharran’s countryman Chanderpaul accept leadership of a depleted team to Sri Lanka when Lara and almost the entire team had refused to tour unless their contractual dispute with the Board was sorted out.
Barbadian fast bowler Malcolm Marshall made his debut on the India tour, while Faoud Bacchus made 250 in the final test before being out hit wicket. Bacchus, a highly flamboyant but inconsistent right-hander who just managed one century in his 19 tests, fell just six runs short of fellow Guyanese Kanhai’s 256, which is still the highest score by a West Indian against India.
PACKER PLAYERS REINSTATED;
The 1979 World Cup was just around the corner and the West Indies were the defending champions. Winning was important.
The Paker players were reinstated; Lloyd was back at the helm and West Indies retained the World Cup. They then went to Australia where they beat the home team 2-0. This was the series which saw the pace quartet of Roberts, Holding, Colin Croft and Joel Garner being formed.
West Indies toured New Zealand in 1980 and suffered from some very poor umpiring to lose the three test series 1-nil despite two hundreds from the solid Haynes.
Tempers flared on that tour as Croft ran into umpire Fred Gooddall and Holding kicked out the stumps in frustration.
After tea on the third day of the second test West Indies refused to take the field if Goodall was not removed. They were persuaded to carry on and it took intense negotiations between the country’s cricket boards to prevent a premature end to the series.
Croft, who maintained that he accidentally ran into Goodall, later said that he did not feel the umpires were cheating for the home team but were just not good enough to be standing in matches at that level. It was also rumored that the umpires lamented that the West Indian bowlers were bowling too quickly for them to properly analyze edges to the keeper.
This was to be the last series defeat for the West Indies in 15 years as they proved almost invincible with aggressive batting, hostile fast bowling, brilliant fielding and great team spirit and commitment. (Sean Devers)